Brown Fat Might Be a Key to Weight Control 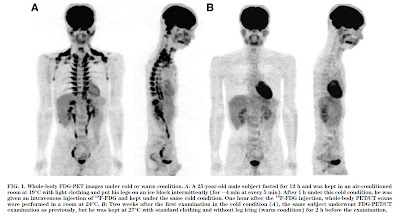 The human body contains small amounts of a calorie-burning tissue called brown fat (brown adipose tissue, BAT) that converts food energy directly into heat. White fat does the opposite: it stores energy. Increasing brown fat production might help people lose weight and control body fat. BAT promotes non-shivering thermogenesis, which generates heat and helps animals and humans adapt to the cold. It is turned on by the sympathetic nervous system, which is the body's fight-or-flight system for coping with stress and emergencies. BAT prevents weight gain by increasing metabolic rate following overeating. While BAT is important for temperature regulation in human infants, it was not considered a significant source of heat generation in human adults. Scientists developed a scanner called positron emission tomography (PET) to detect tumor growth. Patients are given radioactive glucose (sugar) that is taken up in metabolically active tissue such as cancer cells. By accident, scientists discovered significant amounts of metabolically active brown fat in adult humans during PET scans. Most human BAT is found in the neck and above the collarbones, with some around the spine and aorta (large artery leaving the heart). Individual differences in BAT may play an important role in human obesity. Several recent studies showed that activating the genes that control BAT production might help treat obesity.