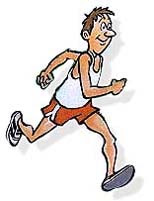 Caffeine is an effective supplement for increasing strength and power. It is currently legal in Olympic sports, but restricted in college and high school athletics. Most studies show that caffeine, even in moderate doses, boosts performance in high-intensity and endurance sports, reduces fatigue, improves concentration, and enhances mental alertness. Scientific studies disagree on the effectiveness of caffeine as a performance-enhancing supplement during high-intensity exercise. A British study led by Mark Glaister from St. Mary's University showed that caffeine (average of 385 milligrams) increased performance during repeated short sprints (12x30-meter sprints repeated at 35-second intervals). Caffeine boosted peak sprint performance by 0.06 seconds compared to a placebo (fake caffeine), an improvement of 1.4%. Caffeine also delayed fatigue during the workout by 1.2%. Caffeine didn't make the sprints seem any easier (perceived exertion), but it increased heart rate more than the placebo. Caffeine had only a small effect on repeated sprint performance. However, it could mean the difference between winning and losing.