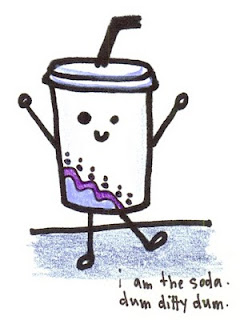 Diet drinks have been around for nearly 50 years, but it hasn't helped our bulging waistlines. Diet Rite cola and Tab, the first generation of diet soft drinks, were introduced in 1958 and 1963 followed by Diet Coke in 1982. They didn't do much good because 66% of Americans are overweight or obese, an increase of more than 33% in 45 years. A study from the University of Texas Health Science Center at San Antonio found a marked relationship between the consumption of diet beverages and obesity. People consuming more than 21 sugar-free drinks/week were 90% more likely to be overweight and 100% more likely to be obese. Over time, increasing consumption of diet drinks also increased the risk of being overweight and obese. An exception to this was in people who exercised:they were able to consume more diet drinks without gaining weight. Scientists speculate that artificially sweetened beverages interfere with hunger and satiety signals in the brain, which causes people to consume more calories.