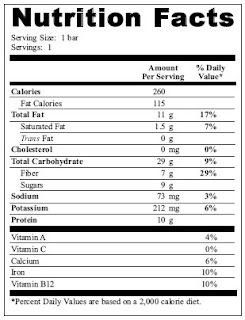 Most of you have heard a gram of fat contains roughly nine calories while a gram of carbohydrates or protein contains just four. For years, dietitians and scientists alike assumed one calorie was pretty much like another, and if you ate too many of them, they'd all end up being stored as fat. It turns out that's not necessarily true-it seems the body can convert dietary fat calories into body fat more easily than it can convert carbohydrate calories or protein calories into body fat. Studies at the University of Massachusetts Medical School point to the following: if you eat 100 calories of carbohydrate, it takes the body about 23 calories just to process it. The energy "cost" to digest protein is even higher. However, if you eat 100 calories of fat, it takes the body just 3 calories to process it and deposit it, most likely on your hips, rear, or waist. So by switching to protein instead of fat, you're not only saving yourself from eating extra calories, you're also ingesting food that's more difficult for the body to store as fat.

Phillips, Bill. "Tips Everyone Who Wants to Look and Feel Better Should Know."
Posted by Positive Changes Hypnosis at 10:58 AM